As the court engineer for a number of years, he did a fair amount of work with artillery, gunpowder, and fighting machines. He saw them as a way to study the physics of objects moving at high speeds, not as a weaponry. He was able to study physics while still getting paid. He invented multi-barreled guns and even steam-powered ones. At the time he had even thought of more efficient ways of bridge building by developing light, strong, and effective bridges, and ways to destroy such bridges.

Flight had been the dream of men for centuries. To kiss the sky, to tickle those clouds would have been heaven for Leonardo. His most famous endeavor started with his desire to imitate a bird. 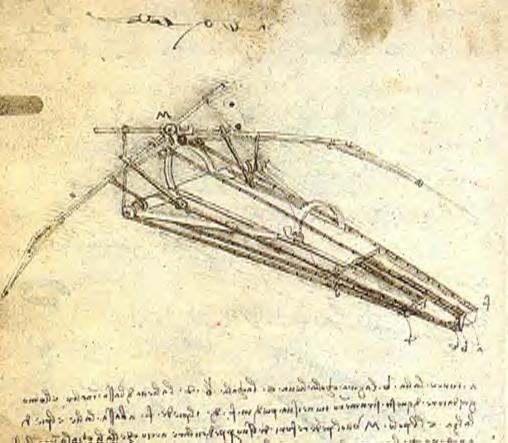 He first worked on flapping wings but then later used the propeller, helicopter and hot air balloon. He started to embark upon this idea by the technique he had used so much: he went to where the idea had come from, its original source, nature. He worked tirelessly to imagine what could make us fly. Methodically, he thoroughly calculated the amount of muscle and the distribution of it around the body that would be needed to make a human fly, and studied the ratio of the wing spans to the weight of a bird. After failure with that approach, however, he then moved to the study of the physics of flying. He studied the currents that affected the wings. He did this to understand how a bird flies without flapping its wings. He had previously thought a flapping machine was the answer, but later came to develop this premature theorem of lift:

“The wind that passes under the wing lifts it up just as a wedge lifts a weight. The flight of cranes…which proceeds to raise themselves by many turns after the manner of a screw…and a screw is of the nature of a wedge”.

He used this later on a helicopter design that looked much like corkscrew. He never did made a working model or flying machine that worked.